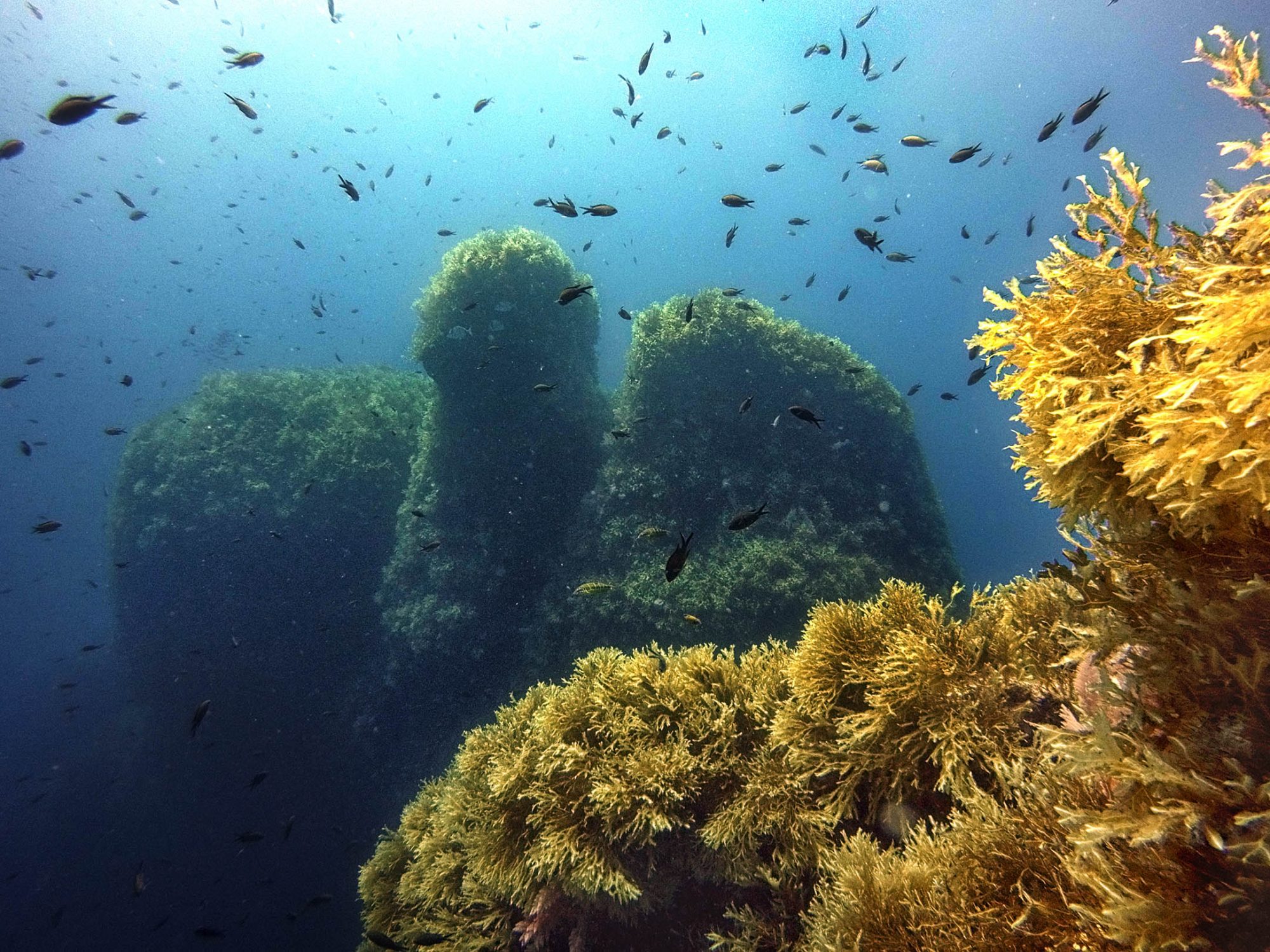 On Saturday afternoon the wind changed and started blowing from the North.  We therefore decided to dive the South coast, opting for a deep 60-metre dive at Ras il-Hobz which would serve the purpose of being a simulation dive for an upcoming dive at Bottleneck cave, whose exit lies at a similar depth.  We planned a bottom time of 25 minutes, as per the below.  For non-divers, first column is depth, second column denotes the plan, third column describes the schedule in case the dive is 3m deeper, fourth column gives the plan in case the dive is 3 minutes longer, and the last column is a contingency plan in the case of lost decompression gas (which means that the diver would have to complete their decompression using the bottom gas instead).

The scenery at Ras il-Hobz is really beautiful at the moment, with Spring colours popping out everywhere.

Upon hitting the water, we proceeded without delay to our chosen depth, encountering a nice anemone along the way, of which I have pulled a (very poor) still frame from some video footage I collected.  It should be remarked that the continuing problems with wastewater dumping at this site has completely ruined the deeper regions; one hopes that the authorities get their act together sooner rather than later and address the very sad state of affairs.

When our bottom time was up, we proceeded with our ascent.  I readied the camera for a couple of pictures of the pillar that rises from the depths up to around 6m below the surface.

Upon reaching the 21-metre mark, we changed to our decompression gas (50% O2).  As we off-gassed, we were entertained by various fish species, such as this shoal of Salemas.

He started pointing at a very strange-looking thing which looked like, well… spaghetti!

Upon moving closer to obtain a close-up shot, I realised it was actually made up of many tiny eggs… this most peculiar feature was none other than sea hare egg-strings.

Upon proceeding to shallower depths, I snapped a picture of the feature that earns this site the name of “Middle Finger” amongst divers.  Just look at the picture below and you’ll see for yourself what I mean.

Ascending to the last decompression stop at 3m, we came across a large shoal of Barracudas, which made the remaining few minutes of deco whizz by.

As we completed our deco I did a few buoyancy & trim checks, with Brian kindly shooting some video footage for later reference.

And that was it!  A very pleasant dive, and my deepest one at that.  At 60m, a level of narcosis was certainly perceptible, but I felt it was very well manageable.  Of course, I have been building up to this depth level gradually over several dives.  60 metres is where I draw a very hard line for air diving.  Below this depth, the PO2 (partial pressure of Oxygen) rises beyond 1.5.  While we regularly decompress at a PO2 of 1.6 (the maximum recommended) while breathing high O2 mixtures (at low work levels), the combined depth-related factors of (a) narcosis, (b) increased density of the breathing gas, (c) higher chances of CO2 retention at depth, and (d) increased work, make me draw a line at this depth, beyond which I am definitely not willing to descend unless using Trimix.  (For non-divers, Trimix is a breathing mixture of Nitrogen, Oxygen and Helium, where the Helium replaces some of the fraction of Oxygen (21%) and Nitrogen (78%) in normal air.)

We had another dive planned for the following day, so watch this space for another post soon!  In the meantime, here goes the actual profile for this dive as recorded by the Shearwater Petrel 2 dive computer.  Stay tuned!

One thought on “Tech dive at Ras il-Hobz”