Of claims and proclamations

I am writing this article against the backdrop of the COVID-19 pandemic. Unsubstantiated claims on various media – news portals and social media platforms alike – are relentlessly making the rounds. How does one filter the onslaught of information? This article keeps the local situation in mind, but some of the points discussed are universal.  Similarly, although it is motivated by this pandemic, many of the themes are applicable to a wider context. Let us have a look at some important things you should keep an eye out for.

I have heard / read a claim by an individual. How can I tell if it is worth taking seriously?

Here are some questions you should ask yourself in the first instance:

If you are concerned about medical issues, then a medical doctor is a good source of information. If you are reading about a prediction (i.e. a forecast about how the number of cases are expected to change in the near future), then you should confirm that the individual in question, even if they are a medical doctor, has formal training in epidemiology, mathematics and statistical analysis, or a closely related field. Most scientists and doctors are responsible and would not make claims that lie beyond their expertise. However, it is important for you to keep the above points in mind. Your best source of information remains the World Health Organisation (WHO) and the health authorities.
If an individual represents a company, it can be the case that their statement serves the purpose of gaining public exposure. Shouting or arguing with force, exuding confidence, or dismissing criticism does not mean that one is right.

I have read an article that reports on new results by scientists. Surely that is a reliable source of information?

There are two main points to keep in mind here.  One concerns the media, while the other concerns scientific papers themselves. Let us take a look at both.

When it comes to the media, there are four main pitfalls to watch out for:

As for scientific papers, do bear in mind that at the moment, many results are being reported about in the press before they have been properly reviewed by other scientists.  This point is a very important one, so we shall take a closer look at it in the next section.

Consider the figure below which describes schematically the process of scientific publishing. A more detailed discussion follows underneath. 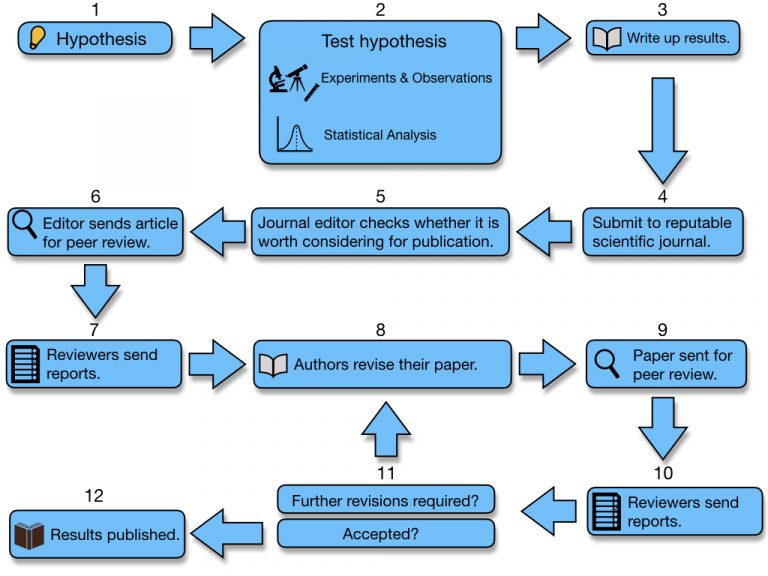 Let us look at each of these steps:

The publication of a paper is not the end of the process.  Following publication, the rest of the scientific community will read and digest the findings.  Other scientists will seek to replicate the results, i.e. check if they make the same findings if they repeat the same experiment(s) and observations.  Sometimes, other groups of scientists will write papers that are a direct response to the published article, e.g. criticising aspects of the paper, reporting on conflicting results, or adding to the discussion. If the authors of the first paper themselves eventually find conflicting results (e.g. after carrying out further experiments and studies), they will want to report on this also. When a paper is good one, other scientists refer to it in their own work.

This is the process of scientific publishing in a nutshell. Is it a perfect system? No. But as you can see, it has in place a number of safeguards to maintain a high level of quality.

Now, you should keep in mind that during Step (4), i.e. when scientists send their results to journals, they oftentimes simultaneously post their draft to an online repository  called a pre-print server.  At the moment especially, many scientists working on COVID-19 are doing this (e.g. here and here) to expedite dissemination of their results so that other scientists can be made aware of potentially important findings as soon as possible.  However, such pre-prints have not been peer-reviewed yet, and they might end up not being accepted for publication. In other words, while these pre-prints may be of significant help to other scientists working in the field (and that is the intention behind them), bear in mind that they are preliminary papers, and as a result, reports about them in the media can be confusing, especially if a short while later they end up being overturned by the results of a different study.

An organisation has issued a statement. How can one tell if its assertions are reliable?

Let us again consider the current pandemic situation as an example, since this is the most current topic.  The two most reliable sources of information you can find  are: the World Health Organisation (WHO), and the Local Health Authorities. If the organisation in question is neither of these two, then you should be very careful, and you should begin by asking yourself these questions:

In regard to the last point, those who might be of a more technical disposition might want to check if any of the below points have been addressed.  It is highly unlikely that the layperson would go into this level of detail, but a journalist might. In any case, most would not be able to carry out a critical analysis of the below points, but watching out for whether they are discussed at all can inform about the credibility of an organisation’s assertion(s).

The presence of any of the below points in particular should make you especially wary:
*If you are interested in learning about how these models work, I provide a link to a video (in Maltese) below.

How does a mathematical model work?

In the below video (in Maltese), I describe one of the epidemiological compartmental models (SEIR).  This video is only presented for educational purposes. Learning how the discussed model works does not mean you should try to predict future trends yourself.