I suppose I hardly need to say that I truly look forward to diving on the weekends, and last weekend was no exception.  We planned to do a tech dive on Saturday morning, so I set up the twinset the evening before, directly at Atlantis Dive Centre.  On the morning, Brian (the guy in the picture above) would simply drive the landy up to Dwejra with both of our twinsets loaded, and we’d meet there. 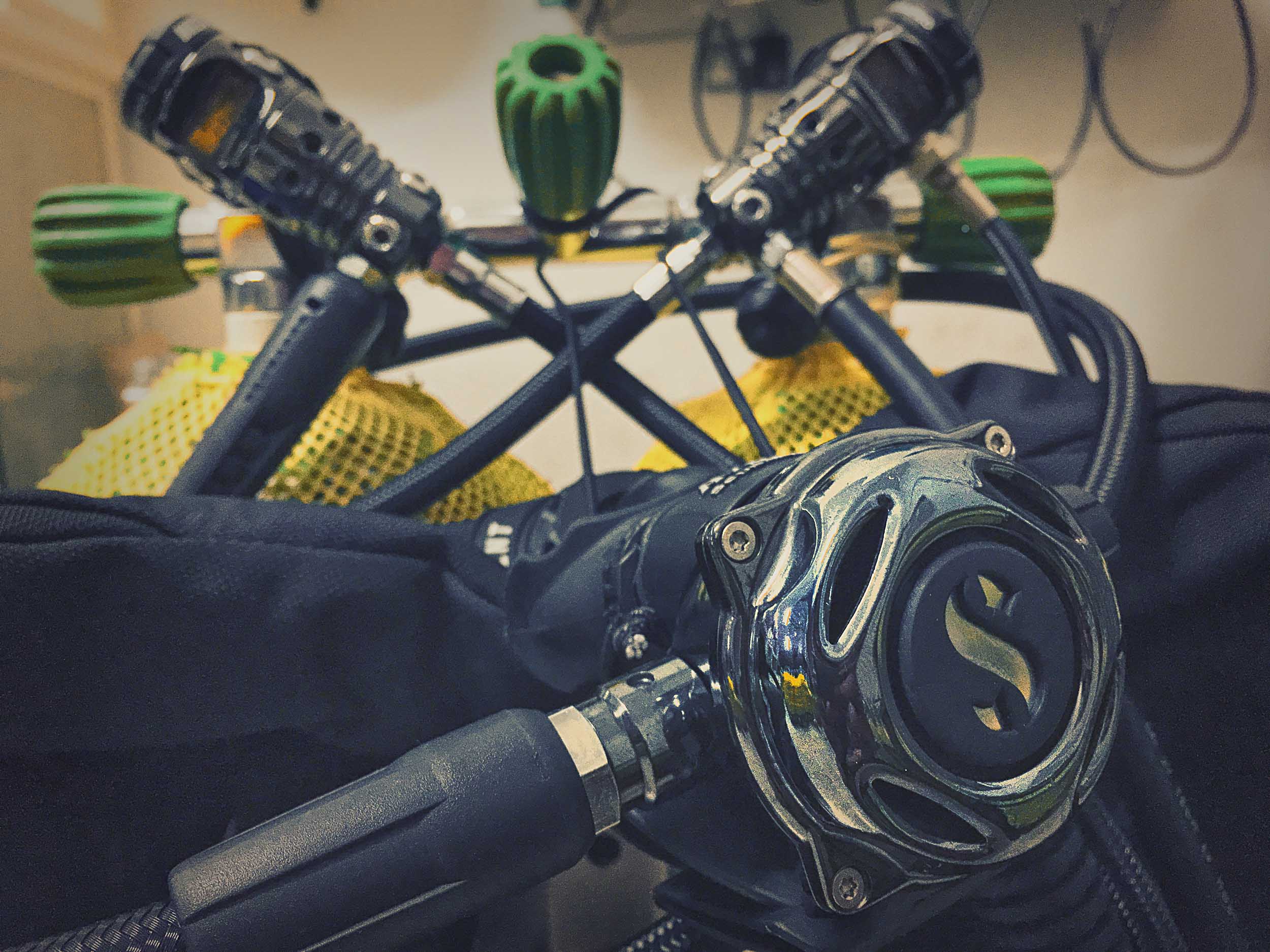 Upon arriving, we assessed the weather conditions.  We decided we would make our exit at Coral Garden as there was a bit of swell at our entry point which could make our exit tricky.  The plan was to dive down to a maximum of 45m, then ascend to 16m, switch to our deco gas (60% O2) and slowly fin to coral garden.  Brian carried the stages to our entry point as I snapped the below picture of the twinsets mounted in the landy.  (By the way, I’m posting these pictures purely for the tech-heads amongst you.)

With the deco cylinders in place and the above photos snapped, it was time to kit up.  At the same time, a friend of ours who had been diving the blue hole emerged from the water and we had a quick catch-up.  With everything set and ready to go, we made our way to the shore for a giant stride into the water.

We descended fairly quickly and to my utter joy, we came across a specimen of Axinella polypoides, a rare sponge that is only found on rocky bottoms at depth.  I had not actually encountered one before, so this sight alone would have made the dive for me.  This was also the point when I realized that since the GoPro camera standard housing (which is rated to 40m) doesn’t quite like being at larger depths, it would be better to start slowly ascending to shallower waters.

Ascend we did.  And that’s when we encountered a huge shoal of barracuda that kept circling around us – an enthralling sight if there ever was one.

We were able to approach them quite easily and stayed with them for quite a while.

When we were satisfied we had obtained enough photos and video footage, we made our way to even shallower water, all the time admiring the beautiful landscape that surrounded us.

Upon reaching 16m, we got ready to switch to our decompression gas.  Brian had even slung the hose around his neck already when we encountered the rare jelly Aequorea victoria.

We snapped a couple of pictures and a short video clip, switched to our deco gas as planned, and continued the rest of the dive in shallow waters.  Bear in mind that breathing a 60% O2 mix means that one cannot breathe it while deeper than 16.67m (rounded up to 16m), the depth at which the partial pressure of Oxygen (PO2) for this mix hits 1.6, which is the maximum acceptable level.  (A high PO2 can cause oxygen toxicity, which manifests itself as convulsions; this can be deadly underwater.)

On our way to Coral Garden, the current was fairly strong, and to make matters worse it was a diagonal-running current, trying to carry us away from the destination we had in mind.  So we did have to fin a bit harder than usual.  Close to the end, I took some video footage of the beautiful Cystoseira, commonly known as sea fir.

And that’s it!  It was a really pleasurable dive with many interesting encounters along the way!  With that, I’ll close off this one here.  Until the next one, happy and safe diving to all!