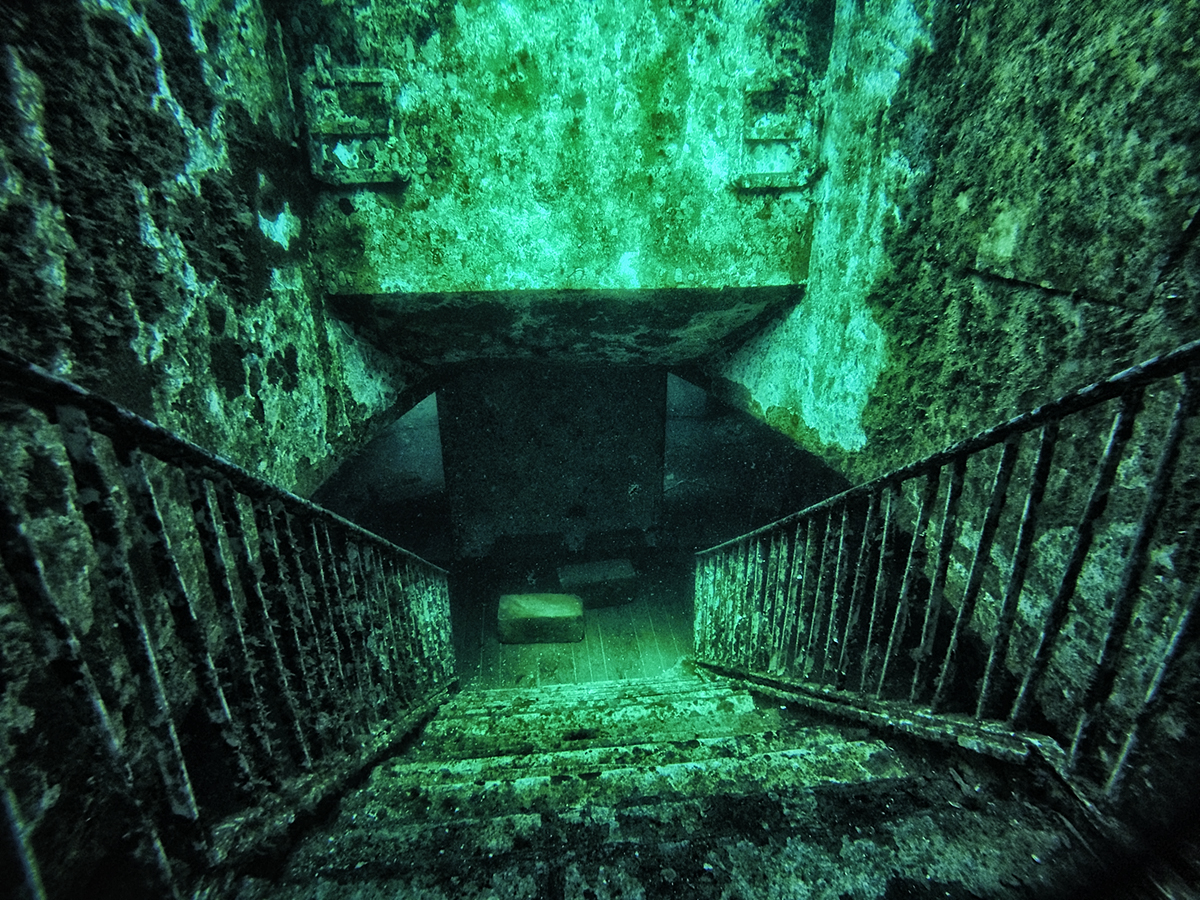 After what felt like an eternity without diving (two whole weeks, imagine that!), I returned underwater today with Atlantis Diving for a light dive on the Karwela wreck, led by Louis Hooker.  Deco obligations were very short, with maximum TTS (time to surface) being 6 minutes.

For this dive, I used 10L back-mounted doubles, mainly for the purpose of getting more practice, but also because I do not particularly like to do ~40-meter dives on a single tank; in the case of a stubborn free-flow or hose failure, one can end up with no air in no time at all!  (Watch this video by Advanced Diver Magazine to find out how quickly this can happen in case of such problems!)  Add some panic to the mix and this could spell big trouble.

Having dived the Karwela before without taking my camera, this time I carried along the GoPro with the intention of taking a snapshot of the wreck’s infamous staircase.  But first things first: what is the Karwela?

For those of you who may have never heard of the Karwela, this vessel started its life in 1957 as the MV Frisia II.  It was brought to Malta in 1986 where it operated as a tourist ferry for sixteen years.  In 2006 it was scuttled around 80m off Xatt l-Ahmar (Red Bay) in the South coast of Gozo, where it sits upright on the 40-42m deep seabed.

Particularly well known is the haunting sight of its staircase, which has graced many books and magazines over the past ten years.  It is arguably Gozo’s best wreck, and – in Summer especially – hundreds of divers flock to the site.

These days there is a huge yellow buoy directly above the wreck, which makes it very easy to descend on it if one doesn’t particularly like “open ocean” descents.  Using the chain as a shot line, one can make a very comfortable, slow descent – particularly recommended if a diver happens to suffer from ear equalization issues.

Once our bottom time was up, we started our ascent as we made our way to the nearby reef, an excellent place to clear any incurred deco time and carry out a safety stop.  While on the reef, I encountered this Bearded Fireworm (Hermodice carunculata) which is better left untouched unless one desires a most unpleasant burn.

The beautiful bristles on the fireworm’s body are actually capable of piercing through human skin, imparting a neurotoxin which (I’m told!) hurts a lot, apart from possibly causing dizziness and making one feel nauseated.  So yeah, look at it as much as you like, but definitely leave it alone!

Once the safety stop was over, right as the dive was coming to an end, a free diver gracefully made his way above our heads, making for a nice shot against the blue sky.  Thumbs up to Louis who alerted me to the unfolding scene above our heads before I would have missed the chance to snap this one.  (I believe at the time I was still staring at the fireworm.)

All in all, this was a nice, light dive which was very welcome after a two-week hiatus!  If you’re planning to dive this wreck, be wary that it is very easy to touch your no decompression limit (NDL) and even exceed it.  As a purely recreational dive, you’ll have just enough time to have a quick look around before you’re required to commence your ascent.  If you use Nitrox to extend your bottom time, a 28% blend will allow you to dive up to 40 metres, where you hit a PPO2 of 1.4, the maximum recommended value for recreational dives.  (Using a 32% blend, the same limit is reached at ~34 metres).  If you want to properly explore this wreck, it’s best if you plan it as a deco dive – but only if you’re trained to do so!

The Karwela is a fine wreck, oftentimes hiding interesting marine life.  And if you get to dive it early in the day, before dozens of divers have been stirring silt all around it, all the better!

Until next time, happy & safe diving to all!